It is pretty predictable story. The guy loves his best friend which is a girl, and she is pregnant with his child because he switch his sperm with the guy who suppose to “donate” his sperm to her. Honestly, I think it’s a boring movie. I’ve must be very ultimately out of this world and out of my judgment bored to pick this movie. Every one know they will be together happily ever after. The end. I just wish they didn’t get married and she’ll married someone else and he married someone else and the kid is acknowledge that he is his son. The end but noooooooooooooo…. it is predictable as it can get. 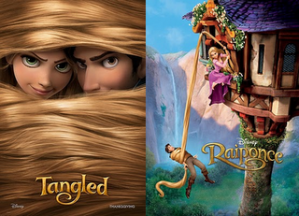 There is a time when I feel like watching a Disney movie and today is the day that I watch it. Like one blogger said “weak story but deep psychological issues” . I don’t know perhaps I’ve become a bitch who criticized on things like;

1. she hold handkerchief with mark of country logo and suddenly she realized she was the lost princess? I bet I was a lost princess as well… /wahaha

2. She had a golden hair when she was a baby and towards the end, Eugene cuts her hair and it turns brunette. She went to see her real parents which is the King and Queen and they accept her as her daughter. Does she suppose to have a necklace or proof that she was their lost princess? /hmm

But all and all, it is Disney. So I don’t think they want to make so much hassle to do a complicated realistic story plot anyway. Keep it as it is then.. Magical Disney where all things possible. /please

Though they do have strong psychological issues message about parents who afraid to let their children out of their sight and be independent.

But I think I am too old for this Disney. Yes, yes I admit.

View all posts by shareenadean